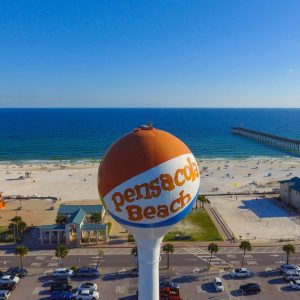 Pensacola, Florida is one of the most beautiful sites in the world! The city does not need a big attraction to sell itself. Pensacola is just that beautiful. Known for its white sandy beaches and crystal blue skies, Pensacola is one of the biggest cities along the Gulf Coast. The city has a proud military heritage, and is sometimes referred to as the “Cradle of Naval Aviation”. For example, it is home to a large section of the Department of Defense. Pensacola is paving the way for a bright future along the Gulf Coast, but do you know the city’s remarkable past?

Pensacola was once inhabited by a Native American tribe known as the Panzacola. This name was then given to Pensacola Bay and the new Spanish settlements in the 17th and 18th centuries. The name changed to “Pensacola” under British rule, but both interpretations have been used interchangeably.

The settlement for Pensacola was established in 1559 by Don Tristan de Lune, a Spanish explorer. Did you know the first Catholic Mass in the world was held on Santa Rosa Island? It is true! Every year on August 15th, it is now customary to hold a mass on the island in the same place that the first one was held. Spain was also one of the many countries to claim the “City of Five Flags”. Every year, Pensacola citizens celebrate the birth of their wonderful city and its history under the Spanish, French, British, Confederate and American flags. On the 450th anniversary, the city welcomed King Juan Carlos I and Queen Sophia of Spain, along with the Elcano, the world’s third-largest ship.

In the present, there is never a shortage of entertainment in Pensacola, and the city prides itself on its diverse and unique cultures. Festivals, events and performances continue to wow both visitors and residents alike, as Pensacola often hosts the region’s greatest musicians, food, shows, artists and vendors. Every year, these crowd-pleasing attractions resonate in the hearts of viewers and provide the city with more history to tell future generations! Pensacola is home to the Blue Angels, which are officially known as the U.S. Navy Flight Demonstration Squadron. On the white sandy beaches, you can watch the planes fly across the sky in an inventive air show like never before.

From more than forty of the country’s best schools to award-winning hospitals and retirement homes, Pensacola is exceptional in every way! Here at Southern View Media, our goal is to make your business exceptional in every way too. We can help your business grow as we expand your digital marketing strategy, complete with unique digital ads, beautiful websites and everything you need to flourish under the beautiful Florida sun!