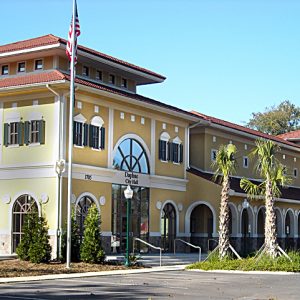 Daphne, Alabama, also known as the Jubilee City, has history deep within its roots. It is a city filled with hometown spirit, history and genuine community. The city of Daphne was founded in 1927, but its rich history tells a different story. Historians date back several centuries to Spanish travelers finding the area that encompasses Daphne in 1557. Historical battlefields, hospitals and trails can be found in Daphne and its surrounding areas: Blakeley, north of Daphne; Fort Morgan at Gulf Shores; and Fort Gaines at Dauphin Island. Other records indicate the city of Daphne being recognized as an actual establishment in 1874. In 1927, Daphne began with a population of 500. Now, the city is home to almost 27,000 people and is constantly growing. Daphne is now the largest city in Baldwin County.

You’re probably wondering why Daphne is also known as the “Jubilee City”—it’s not what you might expect! There are only two places in the world where jubilees occur, Mobile Bay in Daphne and Tokyo Bay in Japan. A jubilee is caused by upward movement of oxygen-poor bottom waters forcing bottom feeding fish and crustaceans ashore. We don’t know too much about jubilees except that very specific conditions must exist for a jubilee to happen. It takes a combination of weather conditions of the day before to be overcast and cloudy and the water to be calm and slick on the surface. A soft wind from the east and a rising tide is critical for the phenomenon to happen. Due to lack of oxygen, some types of fish and crustaceans are affected by the lack of breathable water which slows down natural muscular movements, making them easily catchable at the surface of the water. That’s why Daphne is known as none other than the “Jubilee City”!

Other than fishing opportunities you have from a jubilee, Daphne has many exciting events and activities throughout the year to enjoy. Some annual community events include: Sunset concerts, Brown bag by the Bay, Christmas concerts, tree lightings, parades, festivals and so much more. If you’re looking for some fun between those annual events, you can take an airboat ride around Mobile Bay and experience the natural charm of south Alabama. Take a stroll down Gator Alley Boardwalk to see what interesting wildlife you can find, or make a stop at the American Sport Art Museum to see the largest collection of sports art in the world. Located next to Daphne is its sister city, Fairhope, Alabama. These two cities collaborate to host many fun events throughout the year.

Daphne, Alabama, has a long history of port traffic that has helped turn the city into a growing economic hub tucked nicely between economic engines like Mobile and Pensacola. The Fairhope and Eastern Shore Chamber of Commerce was incorporated in 1959. Ever since, the city of Daphne has been on an uprise for business and community growth. Daphne’s unique location and strong quality of life offers exclusive advantages to produce profitability, awareness and traffic for any upcoming business looking to relocate. The Daphne-Fairhope micropolitan area was voted the 11th strongest economy in the United States. Did you know that Daphne was named one of the “Best 100 Places to Live” by CNN/Money Magazine? Daphne ranked #8 of 97 for best suburbs for young professionals, #16 out of 196 for best places to retire and #16 of 97 for best suburbs to live in Alabama by Niche’s 2019 Best Places. Its growing school system, business district and family-oriented community make Daphne one of the best cities to live in Alabama.

The shoreline of Mobile Bay, short travel to Gulf Coast beaches and parks and endless things to do, make Daphne an ideal place to live, work and play. It offers a melting pot of culture, history and experiences. Even with a growing population, Daphne is able to keep the small-town atmosphere with involved residents who are passionate about their community. Considering moving or visiting Daphne? Come make Daphne, Alabama, your next place to visit.