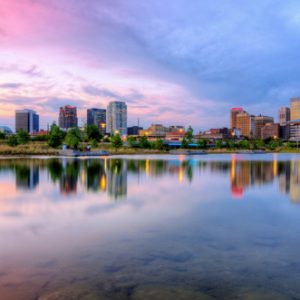 The city of Birmingham, Alabama is one of the fastest-growing cities in the United States and the largest city in Alabama and is entirely a product of the post-Civil War period. Founded on June 1st in 1871, it was originally the anticipated intersection of the North and South and Alabama and Chattanooga railroads. It was here that mineral deposits of iron, limestone and coal built the up-and-coming city of Birmingham, as it became a natural location of iron smelting and many miners moved into the area. One of Birmingham’s famous landmarks is Vulcan, the 55-foot cast-iron statue that symbolized Birmingham’s steel industry in the St. Louis World fair of 1904! The Vulcan has since been refurbished and relocated to its own park. It is also the second-tallest metal statute in America, only after the Statue of Liberty. Did you know the Vulcan is named after the mythical god of metalworking? Birmingham is now the only place in the world where all the ingredients for making iron are located within a ten-mile radius.

Birmingham is home to Sloss Furnaces, which produced iron for nearly 90 years during the early days of the city’s emergence as an industrial giant. It is currently being city-operated as a museum and is recognized as a National Historic Landmark, the only facility of its kind being preserved anywhere in the world! An iconic restaurant within the city is the Irondale Cafe, a home-style cafeteria with Hollywood ties. The cafe was inspired by Fried Green Tomatoes at the Whistle Stop Cafe, the best selling novel by Frannie Flagg. Birmingham is also home to the Alabama Theatre, which is one of the last remaining 1920’s movie palaces in operation. Visitors can see the pipe organ that still rises from beneath the theater’s floor for live accompaniment to silent movie screenings or one of their many other events! Visitors and residents are also able to visit Rickwood Field, the oldest ballpark in the United States! The field opened in 1910 and hosted baseball greats like Jackie Robinson, Babe Ruth, Willie Mays, “Shoeless” Joe Jackson and Ty Cobb. The field remains open today and tours are available on weekdays.

Birmingham is now a national leader in urban green spaces, as thousands of wooded acres for biking and hiking within minutes of downtown, and is also an international leader in healthcare services, which is thanks to the contributions of the University of Alabama at Birmingham. The UAB Hospital is one of the top transplant centers in the world and the area’s largest employer is the healthcare industry. Did you know today the UAB School of Public Health awards the Lou Wooster Public Health Hero Award annually? Well, you are probably asking, who is Lou Wooster? Louise Wooster was a madam who turned local brothels into clinics during the cholera epidemic in 1873. She was one of the few health care professionals who decided to stay and saved thousands of lives. Today is Webster’s teachings are well-known throughout the world and doctors continue to honor her every day!

Birmingham, Alabama cannot be done justice just through all the stories of history and legends. The city has an ancestry that runs for generations and each building has a unique story to tell. The city was built by amazing residents from the ground up, and continues to help move Alabama forward! If you are in the area, we hope you will visit Southern View Media because we hope to help you move your business further!